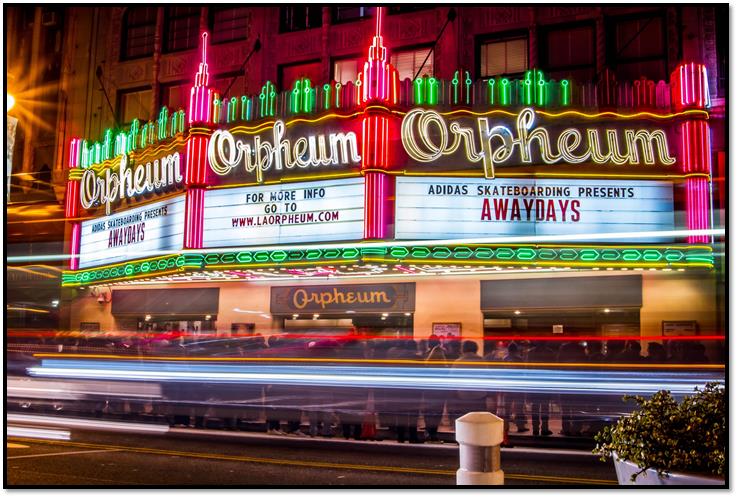 <iframe width=”1200″ height=”675″ src=”https://www.youtube.com/embed/1V1JLT5Qmj0″ frameborder=”0″ allowfullscreen></iframe>
The Adidas Skateboarding team has literally been on a global tear these “(Away) Days.”  With a huge kick-off event in Los Angeles at the esteemed Orpheum Theatre, the Away Days tour kicked off with a bang. Three years in the making, the film drew over 3500+ skateboarders, industry heavies, and fans outside of the Orpheum solidifying the reputation of the brand and its skaters. For many, the film represented a literal list of “Tour de Force” moments for everyone featured.

Los Angeles had the distinction of appearances by Snoop Dogg, House Of Pain, and skate icon, Mark Gonzales during the event. With an exuberant crowd helping both the athletes and special guests with energy, the premiere was definitely an event that was seen as a “you shouldn’t have missed it” moment.

From Los Angeles, the tour carried its way to the East Coast, bringing the New York skateheads, hungry with anticipation, out to play. NYC rider, Tyshawn Jones, brought the crew out en force to make sure that the Playstation Theatre based event didn’t get outshone by its West Coast brethren. With mom’s in tow, Jones brought mad energy to the NY skate folks that only grew to an palpable peak with rider, Dennis Busenitz, was revealed.

Following NY, the Away Days tour broke the hell out. At this point, the ground swell of support for the documentary and its cultural impact hit a point where the only worthwhile stomping ground was the rest of the world.  After its US debut in LA and then NY, the tour saw itself carried out to London, Sao Paulo, and Tokyo.
Cementing itself as a pillar of the international skate community at large, the Adidas Skate Initiative has drawn worldwide crowds and will continue to do so as the tour and brand flourishes. While the five key city premieres have passed, there are still regional premieres continuing through the 27th and shop premieres starting on the 28th.

All in all, kudos to the team’s blood, sweat, and tears through three years of getting this together. Away Days, in our opinion, should stand as a tentpole moment in Skate flicks and docs. With over 90 cities covered, a slew of talent covered, and some really dope visuals… don’t take our word for it… seek it out and peep it on your own…
For More on Adidas Skateboarding:
Online | Facebook | Twitter | YouTube | Instagram