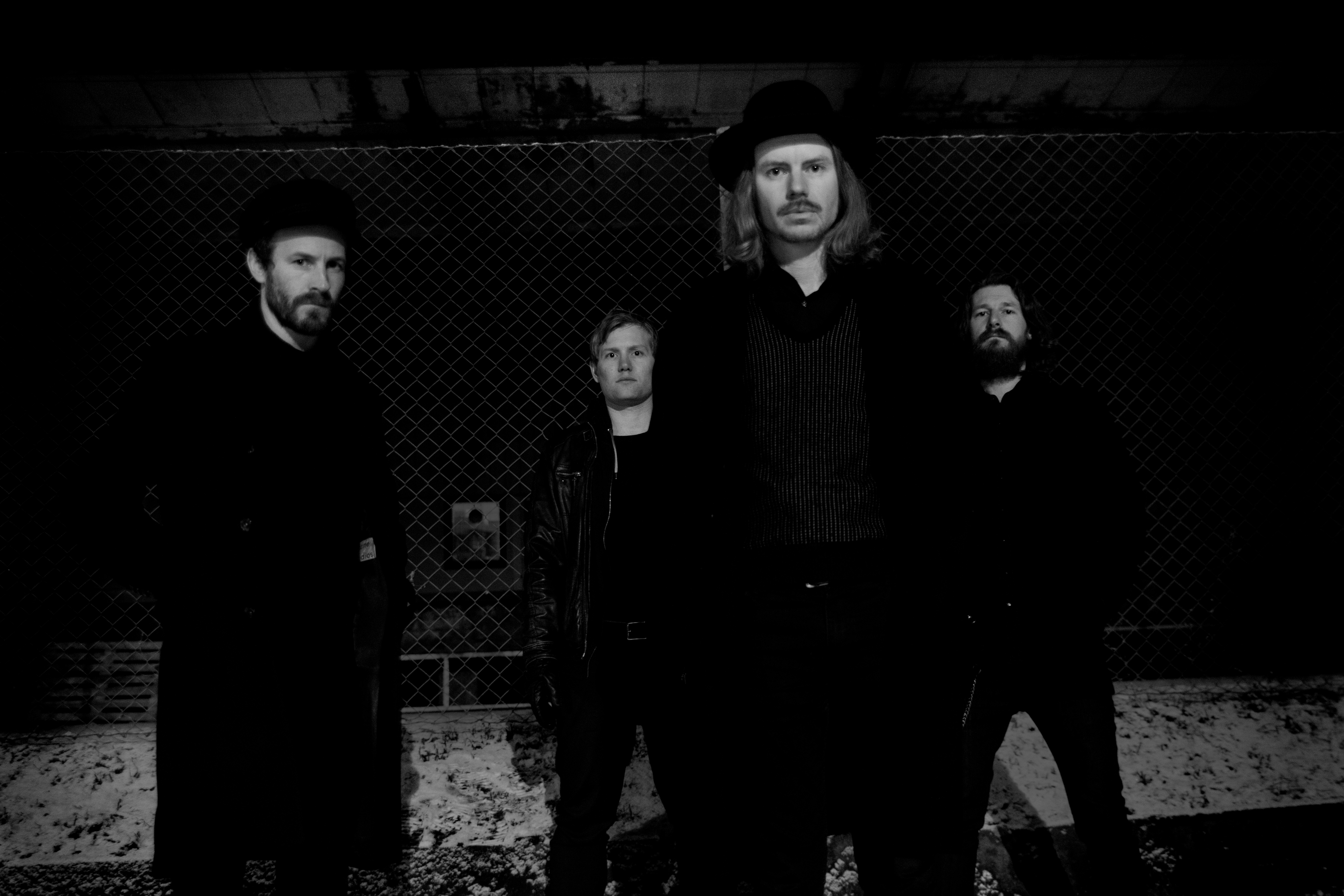 In all honesty, we stumbled upon the Oslo, Norway based gents of Mayflower Madame on a total fluke listen. Happening on one of our favorite indie record shops here in Los Angeles, the track that we would come to find out as Lovesick was playing through the system and begged a second look. Sonically, we were originally drawn by the heaviness of the ‘reverb rock’ the haunting vocal delivery that was reminiscent to Bauhaus. Fast forward a few months and we were able to catch up to the group during their LA tour stop to ask a few questions…
<All questions answered by Trond F. – vocals & guitar – of Mayflower Madame>

1) When we first got a chance to listen to you guys, our first reaction was that you were like the second coming of Bauhaus…  other people have said this in the press as well… is this something that you guys had in mind intentionally… were they influences… and if so, what other influences shaped your sound and identity?
I had never really listened to Bauhaus before people started comparing us with them. Out of curiosity, I then bought one of their records and I do think some of their stuff is great, but I would not consider them as a major influence for us. I actually don’t think any of the other band members know the name of any Bauhaus song or album, haha. So it’s certainly not something we had in mind intentionally… That being said, it’s hard to pin down any specific influences that has shaped our sound. For example, I’m the only one in the band that’s into 80’s post-punk even though that’s the period where most reviewers take their references from. Other major influences for me are a a selection of 90’s shoegaze/noise rock bands and newer neo-psychedelia, but the only influence that we all have in common is probably The Velvet Underground and maybe Sonic Youth. Being the main songwriter in the band, I guess it’s me that shapes our sound the most.
2) How has the response been to your shows and tour spots?  There is an atmospheric quality to your performance that is hard to describe, being performers on the stage and seeing the crowd, what kinds of responses have you seen?  Have they been surprising?  Unexpected?
Of course, some cities were better than other, but we have felt very welcome on every show and are very satisfied with the responses. Maybe the smaller cities were the best actually; among definite highlights were Providence, Salt Lake City and Portland. In general, the audiences have responded pretty much in the way as we are used to from Norway and Europe – most of them seem really focused, perhaps gently moving to the rhythms of the music. Others are more energetic, dancing or “rocking” out at the front of the stage. We enjoy both kinds of audiences. It’s always good to feel that the crowd is really paying attention to the music and what happens at stage.
3) Hailing from Oslo, was there a bit of culture shock with regards to your state-side indoctrination? From all accounts, you’ve been able to maintain an amazing connection with the audiences you’ve played to… why do you think this is?
No, I wouldn’t call it a culture shock, at least not with regards to the venues we played, the audiences and the bands we met. It seems like if you are into the same kind of music you often have a lot in common on many levels – I guess the conclusion would be that “music transcends geography” or something like that 🙂 But seeing ads for guns (and “gun shows”?!) along the highway and getting a 0,8 litres cup when you order a “large” coffee… That was perhaps a bit more of a culture shock! I don’t really know, but I think maybe we are able to connect with the audiences exactly because of the atmospheric quality in our music that you mentioned in your previous question. It’s music meant to indulge oneself in at the same time as it demands an attentive audience.

4) Building off of the last question, do you think the music and art that you exude has anything to do with the cyclical nature of what audiences look at these days? There has been a resurgence in post-punk/new wave/synth/psychedelia aural combinations with many bands… is this something that you are aware of?  Do you have any thoughts on people calling things a cycle?!? Or is it more that each generation builds on its heroes in their own language, which is interpreted by the ‘writing elite’ as a cycle?
The “writing elite” always tend to classify all art as part of a cycle or a movement, but it’s not something we trouble our minds with. We have noticed a neo-psychedelic resurgence in Europe over the past years and I guess we, like almost every band, are in some way affected by “trends” like this, but it then just gets added to the range of influences that are already there – it’s certainly not like we just jump on a cycle/movement or whatever because that seems to be “in” at the moment. Some trends may affect or inspire you, some you don’t take notice of at all – it depends on what you like and it usually happens unintentionally. I hope (and think) this is the case for most bands. Every band should try to have a wide range of influences and process/develop these influences in their own, unique way.
5) What tour dates, singles, and stories should we keep our eyes out for?
In correspondence with our U.S. tour, we just released a new single called “Drown”. In the future months we will do a mini-tour in Germany and maybe also the U.K. as well as some one-off shows in Norway. At the same time we will continue to record tracks for the follow-up album to our debut Observed in a Dream. We expect to release our next album in the fall/winter of 2017/18 and then return the U.S. for a full album tour. Beware and stay tuned.

“Careless Whisper” by George Michael/Wham is one of my all-time favorite songs. I don’t know how that fits with our “dark and mysterious” image.
For more information:
Mayflower Madame | Facebook | Soundcloud | Bandcamp | Instagram