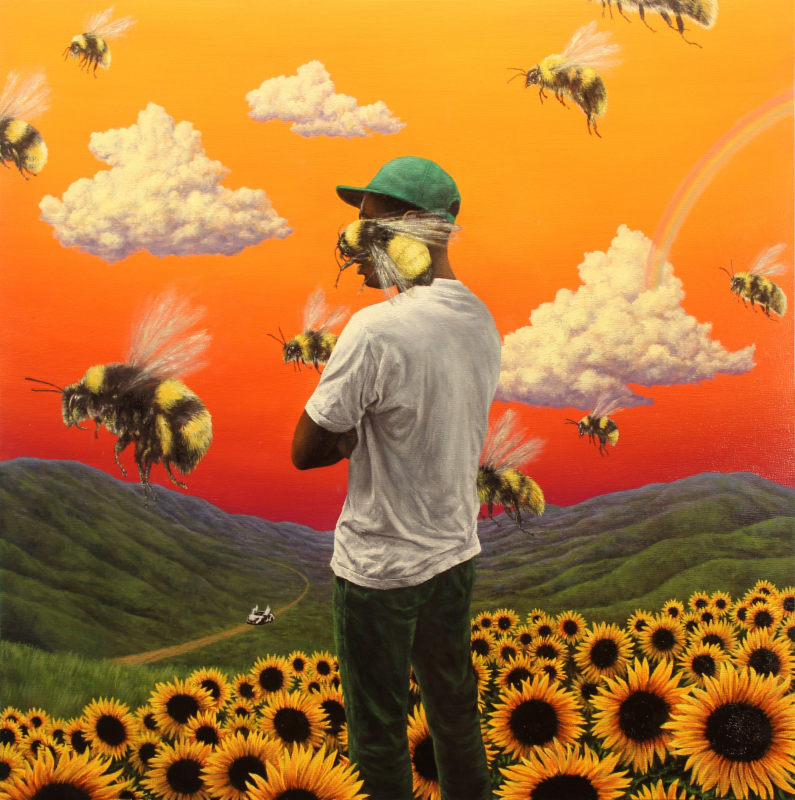 Flower Boy – http://smarturl.it/FlowerBoy
WATCH: “911/Mr. Lonely” on The Late Show with Stephen Colbert –  https://youtu.be/NTJ9dueI9ZY
WATCH: Tyler, The Creator on The Late Show with Stephen Colbert –
https://youtu.be/Vorc3xaggUI
What the press is saying about Flower Boy:
“Tyler’s sincere and most accomplished album”– Pitchfork, Best New Music
“exquisitely arranged, melodious synth-rap, wistful and reflective, heavy on the heavenly”– The Guardian
“his best album yet”– NME
“Flower Boy is sublime” – Pigeons & Planes
“the gentlest, prettiest, most complete music he’s made”– The Ringer

Today, Tyler, The Creator has announced a pre-order of his new album Flower Boy on vinyl.  It will be a one-time pressing on bumble bee yellow vinyl.  The vinyl can be pre-ordered until
tomorrow night as a bundle with a digi
tal download of the album, along with 1″ and 3″ bee stickers.  In addition to the vinyl, a limited run of cassettes is also available to pre-order on golfwang.com. The release follows Tyler’s recent appearance on The Late Show with Stephen Colbert show, where he performed his single “911/Mr. Loney” after a hilarious interview with Colbert.
Flower Boy follows 2015’s Cherry Bomb and is Tyler’s fourth album, available now across all digital platf
orms via Columbia Records. The release is preceded by singles “911/Mr. Lonely” ft. Frank Ocean and Steve Lacy, “Boredom” ft Rex Orange County and Anna Of The North and “I Ain’t Got Time,” and the video for “Who Dat Boy” ft. A$AP Rocky.
On Friday Tyler will perform for the first time since the album’s release at Panorama Festival in New York. 2017 is shaping up to be an extremely busy year for Tyler, The Creator. He recently unveiled a partnership with Converse via a tongue in cheek promotional video. Prior to that he announced the 6th Annual Camp Flog Gnaw Carnival as well as two forthcoming television shows — Nuts + Bolts on VICELAND, which will premiere on August 3rd, and the original animated show The Jellies on Adult Swim.
Flower Boy  features two covers — one designed by Tyler himself and the other by artist Eric White. It is only fitting that Tyler would commission White, whose paintings have been described by Leah Ollman of The Los Angeles Times as being “nostalgic and at the same time also vaguely futuristic, even dystopian,” to visually articulate the world of Flower Boy.
Hear Flower Boy and watch Tyler’s performance on The Late Show with Stephen Colbert above, see below for full album details and upcoming performances, and stay tuned for more Tyler, The Creator news soon.
WATCH: “Who Dat Boy” –http://smarturl.it/WhoDatBoyVideo
Tour Dates
7/28 New York, NY – Panorama Music Festival
7/30 Detroit, MI – Detroit Mo Pop Festival
10/28-29 Los Angeles, CA – Camp Flog Gnaw Carnival