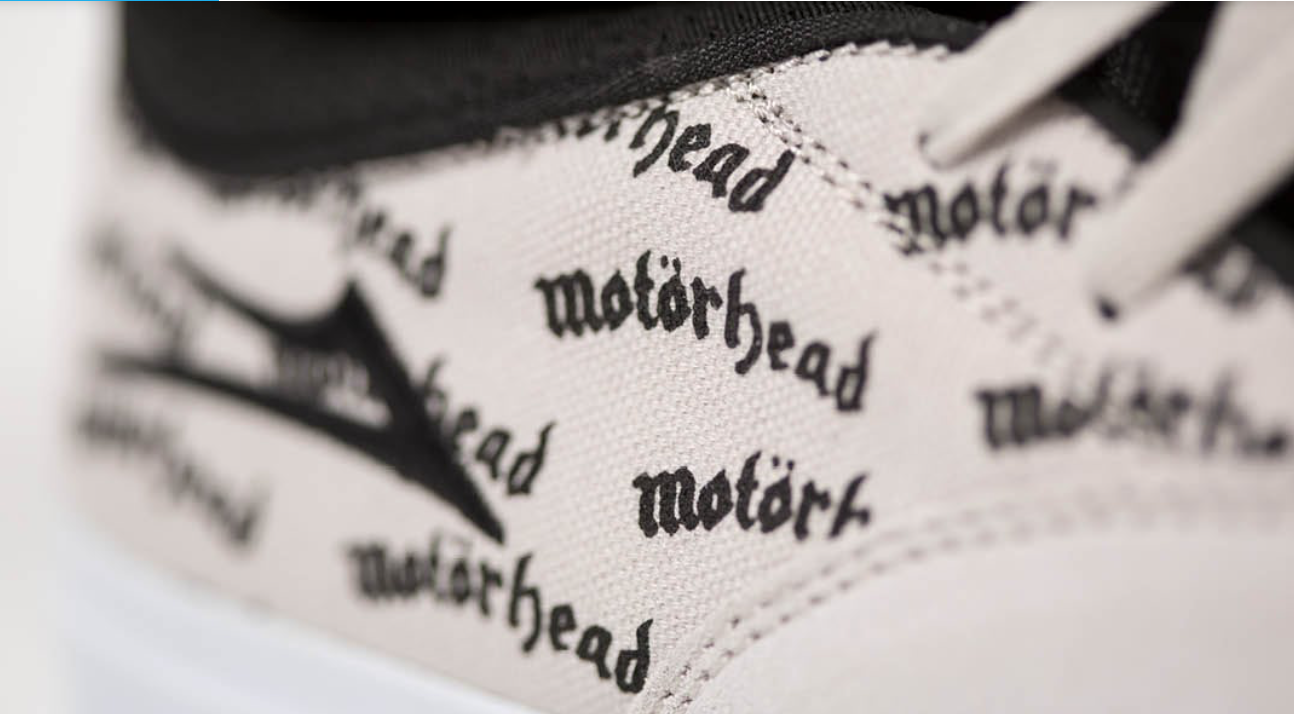 Look no further for next generation of skateboarders than Riley Hawk.Son of one of the most iconic skateboarders of all time Tony Hawk. His shoe on Lakai LTD. Footwear are legends of their own.Founded by two of the pioneers of skateboarding in the ’90-00 Rick Howard and Mike Carroll.Have collab to bring you Riley x Lakai x MOTÖRHEAD shoe.When asking Riley where he draws his musical inspiration for his skating, band, and lifestyle, MOTÖRHEAD was at the top of his list. Riley truly embodies the “Fast and Loose”, pedal to the metal, skateboard/rock and roll lifestyle.

The Lakai x MOTÖRHEAD collection is available at Lakai.com and select retailers beginning May 19th. http://lakai.com/collections/motorhead

For those of you that don’t know (where have you been?) heres a little background on the legendary Motorhead.

An English rock band formed in June 1975 by bassist, singer, and songwriter Ian Fraser “Lemmy” Kilmister, Grammy Award winning pioneers MOTÖRHEAD quickly rose to great prominence in the British punk and heavy metal scenes.MOTÖRHEAD never compromised or changed their unique, raging sound and attitude, which saw the band and their music become a lifestyle for many people from all genres, whether rockers, punks or alternative.
As a power trio, they had particular success in the early 1980s with several successful singles in the UK Top 40. The albums Overkill, Bomber, Ace of Spades and particularly No Sleep ’till Hammersmith cemented MOTÖRHEAD‘s reputation as a top-tier rock band. The band are ranked number 26 on VH1’s 100 Greatest Artists of Hard Rock. As of 2018, the Grammy-winners have sold more than 17 million albums worldwide. Road dogs extraordinaire, for the last 20+ years of their career, MOTÖRHEAD were Kilmister, guitarist Phil Campbell and drummer Mikkey Dee. In early 2015 they entered the studio to begin work on Bad Magic, which was released in late August 2015. It quickly became one of the band’s most successful albums, but sadly, Lemmy passed away on December 28, 2015. The band’s last record turned out to be a recording of two typically blistering sold-out shows from the Bad Magic tour, at Munich’s Zenith concert hall only a month prior to his passing.
MOTÖRHEAD released 22 studio albums, 13 live recordings, 12 compilation albums, and four EPs over a career spanning 40 years. The MOTÖRHEAD legacy (and lifestyle) lives strongly on through their music and loyal fans.

Lakai is a Los Angeles, California based footwear manufacturer that enjoys a rich history in the skateboarding lifestyle. Founded by professional skateboarders Mike Carroll and Rick Howard in 1999, Lakai is built on the dedication and pride they have always invested into their skateboarding and the Girl and Chocolate brands.
FOLLOW ON SOCIAL MEDIA:
@lakailtd @officialMotörhead @rileyhawk #LakaiXMotörhead