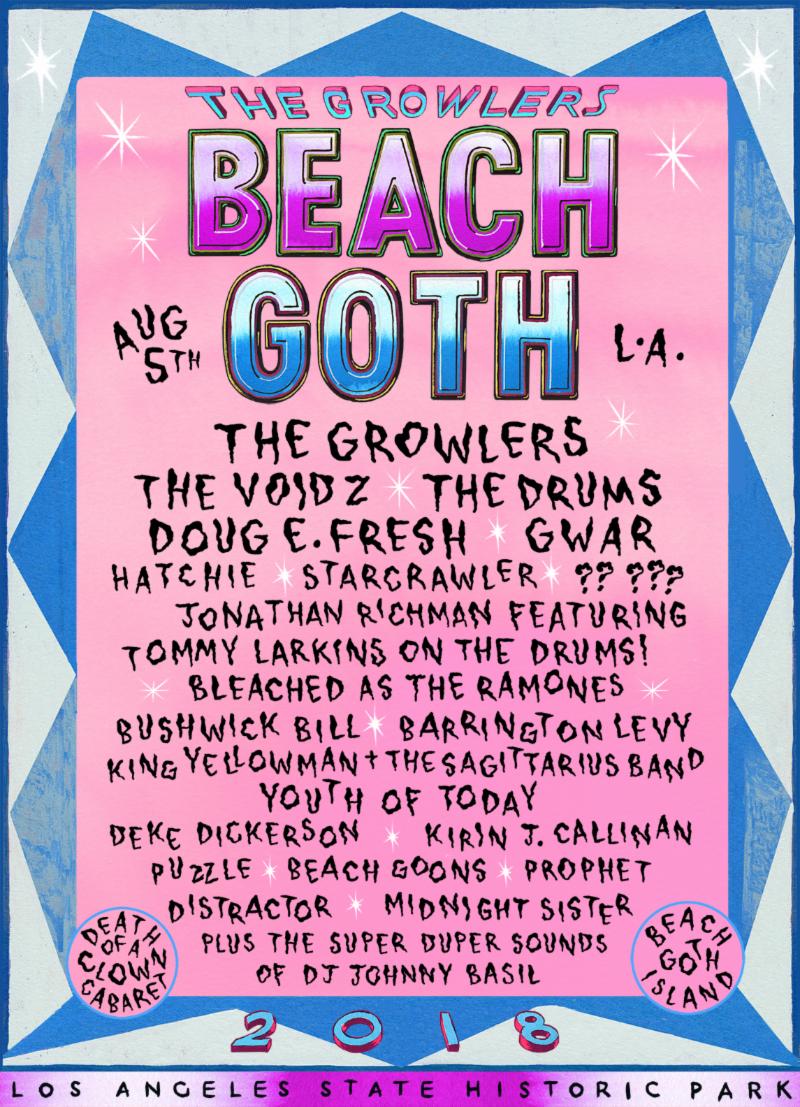 Beach Goth Is Back !!! The Growlers will be headlining and hosting along with The Voidz and the The Drums. As reported it will be held at Los Angeles State Historic Park Sunday, August 5, 2018. Gates open at 1pm, with all tickets priced at $66 each (available for purchase at 10am this Friday, June 15, at the  event website).

This years lineup up for the BG are Jonathan Richman,GWAR,Hip Hop and beatbox legend Doug E. Fresh,Youth of Today, dancehall s KingYellowman and The Sagittarius Band and Barrington Levy, the Geto Boys H-Towns  Bushwick Bill and more to be announced.


About the Park
One of the most historically significant sites in the city,Los Angeles State Historic Parkis a 32-acre parcel of green space in downtown LA, with access to a wide range of public transportation. Originally home to Native American peoples such as the Kij, Gabriele and Tongva, the park later became the “Ellis Island of Los Angeles” where new arrivals from the east first disembarked. It gained the nickname “The Cornfield” as LA’s major transportation hub, so called because of the corn leaking from train cars and sprouting along the tracks. Following a multi-year, $20 million renovation, the State Historic Park reopened in 2017, now with sculpted paths, grassy hills, a stunning pedestrian walkway, and a massive performance space for concerts and festivals.
About The Growlers
Since the release of their first LP Are You In or Out? In 2009, The Growlers have forged their own twisted path on the global music scene. They’re the party band that grew into a traveling circus of psychedelia that spawned their own event, Beach Goth. Lead singer Brooks Nielsen draws a particular devotion among Growlers fans, as does chief cohort Matt Taylor, The Growlers’ music director and chief guitarist. Their most recent LP was 2016’s City Club, produced by Julian Casablancas, which saw them expand their palette to include West African, dance, and electronic influences. The band is currently in the studio with Jonathan Rado (Foxygen) and Shawn Everett (The War On Drugs) and preparing for an upcoming world tour.