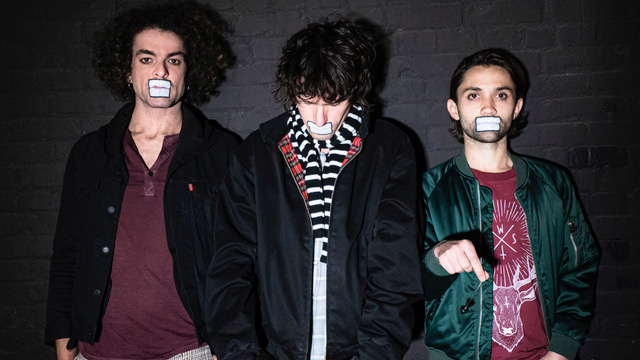 Available on all streaming platforms and on 7” limited vinyl titled
“It’s not something that you do It’s something that happens to you”
March 27, 2020 via Nomad Eel Records

Carré is all about conception, abstraction and distortion of reality. Stemming from a surrealistic outlook on our world, inspired by geometrical shapes and patterns, Carré gives birth to an angular, edgy musical experience.

“There’s something about not getting attached to the form, when you step back and disengage yourself from the form, you become in touch with something more pure and spiritual, while remaining in the square.” -Carré.

Carré is a French band based in Los Angeles.

Carré creates a language that’s not necessarily bound to a structure – it’s a journey.

Carré’s lyrics highlight an element of provocation, and freedom of perception.

Carré blends aggressive, dark and chaotic elements with hypnotic drum loops inspired by the electronic French Touch. Being “Carré” in French also translates as playing tight, or on point.

Created by its three members in 2019, “The making of our band started with this whole idea of having two drummers perform together. It felt like a statement.” says Jules. “We always wanted to keep people moving and tend to focus on the beats first when we write”.